Paedomorphism, also known as ‘Neoteny’, is the retention of juvenile traits into adulthood. That is, those features that we associate with infants and babies is carried through into adulthood and do not mature as would normally be expected. It is these features which we focus on when we are describing someone or something as being “cute” “baby-faced” or “adorable.” All words which are warm and fuzzy and get our maternal and paternal emotions heated up. Below is a diagram which summarises the main features that are considered paedomorphic. Large eyes in relation to face size and a large domed head disproportional to the body are what I would consider the most obvious features that can be recognised in paedomorphic individuals.

Anything can be paedomorphic, from humans, animals to even inanimate objects such as toys. A very interesting article I recently read has shown that paedomorphism has been influencing toy makers. The old ‘Barbie’ dolls and ‘My Little Pony’ toys used to look very similar to adults and mature horses, in terms of their proportions and features. In today’s world however paedomorphosis has taken over and now we are seeing dolls such “Bratz” which have enormous eyes, tiny mouths and large heads in comparison to their bodies. This is the same with the modern “My Little Pony” toys who also have the exaggerated large eyes and domed foreheads. 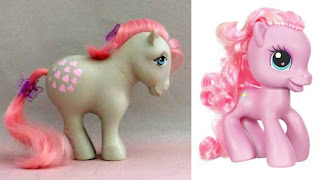 It seems the toy makers have found a money maker in getting the “cute factor” in their products. Studies have shown that humans find paedomorphic features more attractive whether that be in humans, animals or even teddy bears and we will subconsciously choose to look at that face over a mature face. This is mostly put down to the infantile features tickling our subconscious need to care for a younger individual. If you want to look up more about the history of Neoteny then do a good old wiki search and you will come across a very interesting and useful page explaining pretty much everything you need to know. What I will be doing here is relating paedomorphism to our good old canine companion.
If any of you have watched the BBC Horizon programme on dogs (It was a couple of years ago. But I’ve found a youtube link for anyone interested in watching..) paedomorphism or neoteny in domestic dogs was mentioned and it was this that first sparked my interest in this topic. It has been documented that our domestic dog species exhibit a large amount of paedomorphism and are likened to juvenile wolves. This can be in their behaviour as well as their aesthetics. The best examples of neoteny are the dogs in the toy group e.g. the Cavalier King Charles Spaniel, Chihuahua, Pekignese, Yorkshire Terrier, and Pug to name a few. This can be seen quite clearly; Lets take the pug for example, 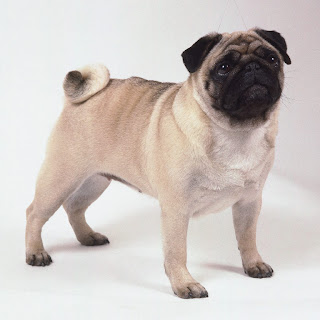 When you compare their faces with the cartoon above you can see that they have a large domed head, large eyes and small noses and mouths (so small infact that they have difficulty breathing, but that’s another topic..). And that is exactly the reason why dogs like the pug, and those others listed are considered the “cutest” of the dog breeds and are specifically companion dogs rather than working dogs, because they are reminding us of human infants. They are ticking all the boxes in terms of replacing a human child and that is why they are nutured so much. Perhaps a little more than they need to be at times… 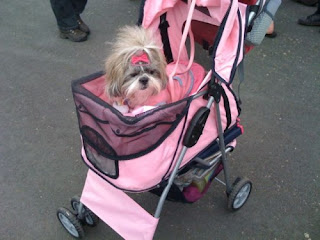 So our dog breeds are very cute, and we love them. That I do not deny. But what happens when you select of paeodmorphism? What happens when you selectively breed an animal to retain infantile or juvenile features. In turns out there are a lot of inadvertant results from producing something adorable. But I’d like to start this by first reversing the question, which takes me to one of my favourite studies in canids:

The silver foxes of Russia. Scientists in Russia wanted to learn more about the domestication of canines and so took a population of silver foxes and began selectively breeding them. They took the tamest foxes and bred them, and selectively only breeding from the next generation who were also tame. As generations continued they did produce a population of foxes who were extremely tame and began showing very dog like behaviours such as wagging their tails when a human approached etc. This was very exciting as it was the first evidence that there is a “tame” gene. To confirm this was not by chance they also selectively bred from the most un-tame or aggressive foxes and produced a completely opposite population of foxes who would not accept any human contact and were even described as “Dragons” by the scientists. How this links to paedomorphism is the tame foxes began to change in their appearance. They stayed looking like fox cubs for longer and even began developing features we most often relate to dogs such as patchy coats, and big floppy ears. 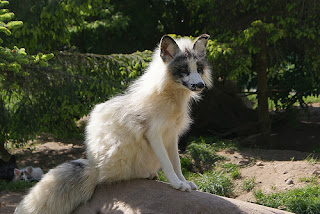 This fascinates me. It seems that by selecting for a tame gene you have inadvertatly produced a paedomprhpic individual. Or if you look at it from a different angle, you get tame individuals by choosing animals who have degrees of paedomorphism to start with….So paedomorphism has a link to tameness. This is supported by other behavioural studies who have shown that the more paedomorphic breeds like the Cavalier King Charles Spaniels have fewer behavioural repertoires and were more likely to approach unknown dogs in a playful manner like puppies compared to dogs like the German Shepherd who approached with more caution and showed a wider range of behavioural repertoires. Whats more, the communication between the dogs is affected by paedmorphism, and this can be visually observed. Just take a moment to think about the amount of subtle body language us humans are capable of.. Dogs have this too. Or more to the point, wolves are capable. A wolves body language can range from a slight twitch of the upper lip, a complete snarl, an ear pinning back against the skull, ears perked forward, tail up and bushy etc. etc. And this is extremely important in the pack to settle hierarchy and communicate with other wolves. But our paedmorphic breeds lack the features to do this. The pug cannot erect its tail, a springer spaniel cannot perk its ears up, a pekignese would struggle with a lip twitch due to its condensed face etc. So by selecting for paedomorphism, while they are aesthetically pleasing out beloved dogs have lost the ability to communicate as successfully as their ancestors would.

Is behaviour the only thing altered by the loveable faces? Sadly no. There is a great deal of evidence that almost all of us know by now is that changing the morphology of dogs in the way paedomphism does can have devastating consequences on their health. The pug and its breathing is just the start, there are eye problems, dental problems, and the one close to my heart, neurological disorders that occur from the infantile head.

The Cavalier King Charles Spaniel suffers from Chiari-like Malformation (CM). This is a condition where the occipital bone of the dogs skull forms too quickly and fuses too early, so the cerebellum of the brain grows too big for the skull and herniates. From this Syringomyelia (SM) can develop which is fluid filled vesicles collecting along the spinal cord. These can result in devastating clinical signs causing the animal horrendous pain and suffering. And why does it occur? Because we have changed the Cavaliers skull shape to benefit our visual desires. In order to get a paedomorphic head the skull needs to change in a way that the skull remains domed and doesn’t grow with the skeleton as in normal maturation. In the Cavalier this has resulted in CM and SM.

The Cavalier King Charles Spaniel is an amazing breed of dog, which the best temperament and is an extremely sweet looking dog. But it has all come at a terrible cost, to which I would even say the breed should not exist at all…I am very interested in paedomorphism and would love to find out more about how using it as a selective pressure can alter our dogs, in hope that we can find ways to reverse the adverse consequences. My dissertation has excitingly shone light upon the idea that gait may also be affected in paedomorphic breeds and I am hopefully on the next few steps to publishing this data. But we will have to wait and see for that..
Posted by Emma'jane at 14:45

Emma'jane
I love dogs, and my whole life has involved them in one way or another. Whether that be playing with feral puppies when my family and I lived in Oman, working at a small animal veterinary practise, being a dog groomer, obedience training and dog showing. And hopefully one day, dog breeding. It still to this day shocks me that a nation of dog lovers is able to hurt dogs in such a way. Whether that be dog fighting, animal abuse, puppy farming or inbreeding. This blog I'm going to treat almost like a diary so I can lay down my thoughts on the topic of dog health in hope that one day I can refer back to it and use my information in some way. I would just like to say I am a member of the Kennel Club and I do think the Kennel Club is slowly making changes that I support. I do wish they would do things quicker but it would be a shame to lose something as large scale as the Kennel Club is today.